Chad and I are opposites when it comes to desserts. For Chad, he prefers desserts that are chocolate based or would taste good if he asked for chocolate on the side to dip in. When we celebrated Valentine’s Day just a few weeks back, we went to Cheesecake Factory…and for those of you who have been there before, know that they have more than 20 different cheesecakes to choose from. Recently, they added a red velvet cheesecake…which is to die for. It is layers of cheesecake and red velvet cake with white chocolate on the outside. To me, it was perfect, but to Chad he asked for a side of hot fudge…then it was perfect :) I much rather eat something that is fruity, like apple cobbler or something berry. When I don’t feel like sharing a dessert, I will order something without chocolate because I know that he will not want a bite :)

My best friend Atsuko is the world’s best chef. Ever. It wasn’t until I met her that my palette changed and I went from ordering the classic burger to more exotic dishes. She pretty much can make anything look appetizing…which is another skill within itself. I can’t claim the same for myself…I lack in the cooking department. However, Atsuko was able to teach me a few fun recipes over time which I have been able to impress family and friends with. Her dessert recipes are to die for….and at one point, our husbands thought that they would die if they ate another piece of whatever-dish-we-cooked-too-many-times again. One of the desserts that we loved to torture them was Key Lime Pie. We would purposely make it because we knew they would gag at the thought of eating it again, so she and I would enjoy it by ourselves. The appeal, in addition to it’s taste, was how simple it was. Last night, we had a friend visiting from out of town, so what better opportunity than to make it?

So, here’s the recipe for you to try out for yourself. And remember ladies, they way to a man’s heart is through his stomach…but remember moderation is the key…you don’t want him puking every time you make mention of making key lime pie!

Cut limes in half and squeeze limes until you get 1/3 cup of lime juice. It is best to use a juice appliance or hand held juicer.

Let cool, then put in the refrigerator to chill.

Add whip cream and garnish with left over limes. 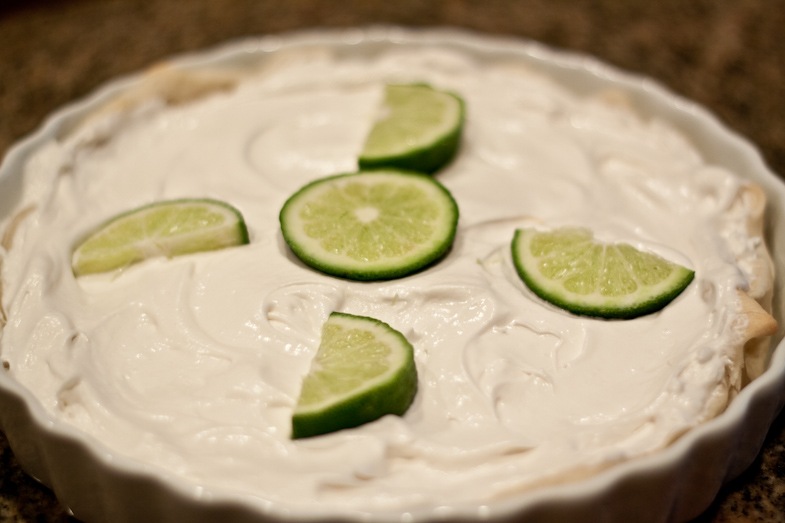